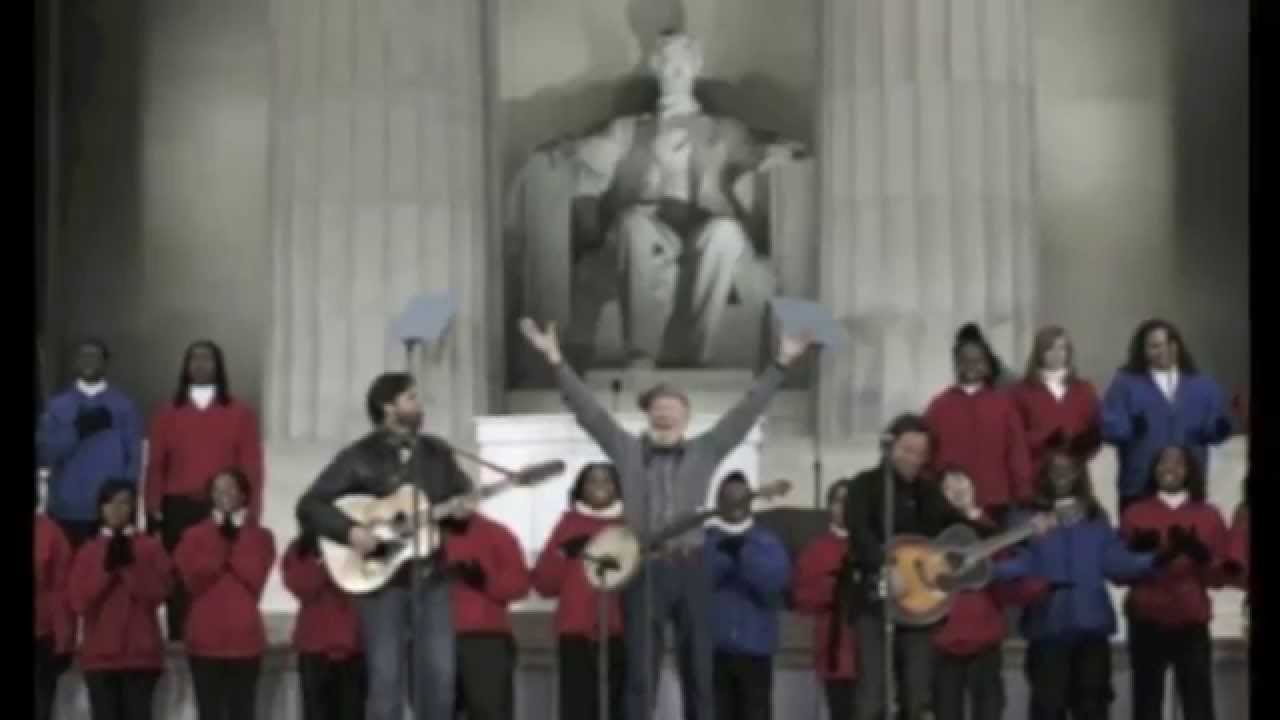 Lucia drove all the way out here from Oakland because she wanted to be with me at her home and with the grandchildren on Tuesday morning for Obama’s first Inauguration.  We watched the Lincoln Memorial on her lap top – a wonderful show and cried tears of happiness, especially for me when I heard Pete Seeger sing. Did you know that man has played an important role in my life since I first heard him in 1948 at the Progressive Party convention in Philadelphia when Henry Wallace was running on a Progressive Party ticket for president against Harry Truman? I once heard Seeger introduced as the only human being who would sing and talk at the same time.

Attached is a bit I wrote on Pete Seeger.  Please note:  It was written after watching Obama’s first inauguration.

I first saw Pete Seeger hold his banjo high, belt out “Ain’t Gonna study war no more…”. That was1948 on a movie (or was it early tv?) screen from at the Progressive Party convention in Philadelphia when Henry Wallace was a third party candidate for president against Harry Truman. Wallace lost, but a young Pete Seeger joined up with the Weavers: Ronnie Gilbert, Lee Hays and Fred Hellerman . They topped the charts with “Good Night Irene” and “Tzenat, tzenat”

Then In the early 50’s, Sen. Joe McCarthy started a vendetta against anyone even the slightest liberal labeling them “Communists”, “Reds”, traitors. Pete was among the many entertainers who were black listed because he refused to testify before McCarthy’s committee. Consequently, Pete’s venues were cancelled, records were taken off the air and finding new venues was pretty near impossible.

Except for Hyde Park – Kewood, Chicago, that “hot bed of communist University of Chicago faculty “and the home of parlor pinks like me. There Pete found a concert home at our modest Kenwood Ellis preschool where he gave us many benefit concerts. I have multiple memories of multiple children sitting on my lap – a bright spot in those dark McCarthy years- listening to Pete, their small voices singing along with “Puff the Magic Dragon.”

One time Pete gave us parents an adult only concert with Blues singer, Big Bill Broonzy . Broonzy’s signature song was: ‘If you’s white, you’s alright,/ if you’s brown, stick around/ but if you’s black, get back, get back get back’). Broonzy, six and half feet tall, very black, played a 12 string steel guitar. After the concert we went our leftist friend’s home and stayed up all night listening to Seeger and Broonzy swap songs.

Pete’s first public concert, in the late 1950’s after McCarthy days, was right there in Hyde Park, that “hot bed of red communism”, the University of Chicago. Seeger kept giving encore after encore to an SRO house. When it came time to close Mandel Concert Hall, he led the entire audience out into a cold April day, all of us laying down our swords and shield, “Down by the Riverside”. We continued singing, bundled up on the steps of Mandel Hall until we froze up and decided to go home.

There followed concerts at orchestra hall, the phenomenal Weavers Reunion at Carnegie Hall. Both Seeger and the Weavers were back in the limelight.

In the late 1970’s, I saw Pete perform at the gym at Sonoma State University where I was re-entry student. A small child started crying, Pete stopped singing, walked down the aisle to the mother and child, sang a lullaby and the child went to sleep. He then returned to his presentation.

He sang at Berkeley High at Malvina Reynold’s memorial services singing Reynold’s songs and many of his own. Later, I took Lucia, my youngest daughter, who’d somehow never managed to see him (She had the flu or measles or something) to hear him sing with his grandson at Berkeley High. Then there was the time our whole family went to hear the Weaver’s Reunion at the Greek Theatre in Berkeley.

On Monday night in 2009. I learned for the first time, lyrics had been censored lyrics to “This Land is Your Land” – a song much used by Harry Truman in his 1948 campaign. There on the steps of the Lincoln Memorial, Pete sang these uncensored words in a hundred thousand voice sing-a-long:

There was a big high wall there that tried to stop me;
Sign was painted, it said private property;
But on the back side it didn’t say nothing;
“That side was made for you and me.

“In the shadow of the steeple I saw my people,
“By the relief office I seen my people;
“As they stood there hungry, I stood there asking
“Is this land made for you and me?

When I look back over sixty-five years of hearing Pete Seeger’s voice of hope, of love, of compassion, I wonder if Pete isn’t an incarnation of Elijah, reappearing to bring peace to the world.